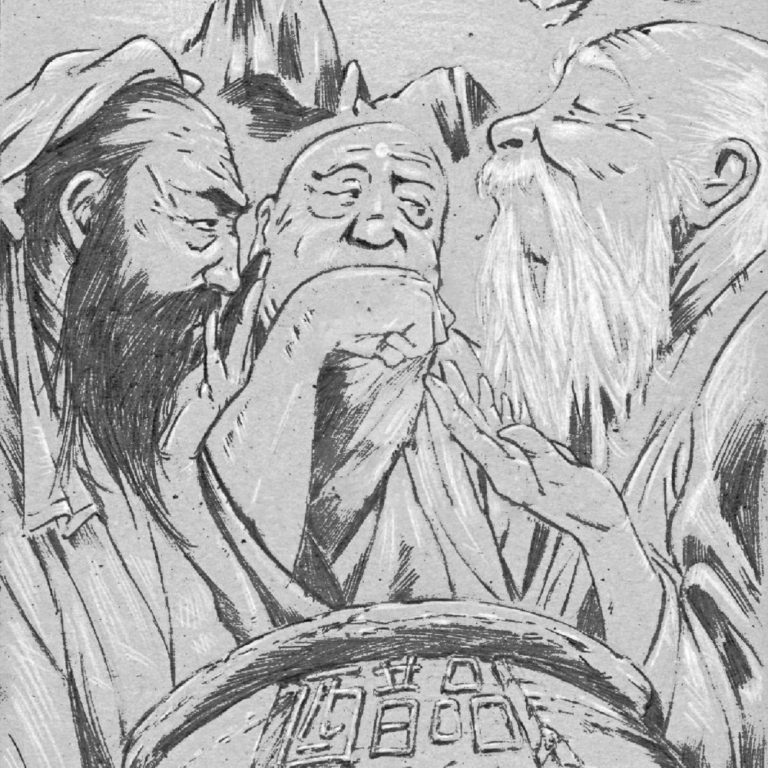 Taoism is a philosophy that emerged from China around 2,500 years ago, and it is beautifully illustrated in an ancient painting called “The Vinegar Tasters”.

In the painting you see 3 figures that represent the 3 great philosophies of the East: Buddhism, the teachings of Confucius, and Taoism. Each of the 3 philosophies are represented by the figure of their founders, so one of the figures in the image is the Buddha, another is Confucius, and the other is Lao-Tse—who is the founding philosopher of Taoism.

In the image the 3 figures are standing by a vat of vinegar, which represents life. Each philosopher has dipped a finger into the vinegar and has tasted it.

The Buddha appears grimacing after having tasted the vinegar because the First Noble Truth of Buddhism is that life is suffering: for the Buddha life was bitter.

Confucius is also grimacing after tasting life. He taught that the world was out of order, and the only way to bring it into harmony again was through discipline, honor, duty, and worshiping the ways of our ancestors: for him also life was bitter.

Lao-Tse, after tasting the bitterness of life, is smiling because, according to the Taoist view, life can be indeed bitter—so what?

On the other side of bitterness you will find sweetness, and if you had never known the bitter, how would you know the difference?

For a Taoist bitter suffering is just one side of an event or a situation, its opposite is joy, or knowledge, or experience, or any number of positive things. A Taoist believes if we did not know the bitter side of life, we could not know the sweet.

In the Taoist view of life male and female, hot and cold, success and failure, gain and loss, and birth and death are parts of the same whole, dictated by Creation, and its designer: Tao.
Nothing can exist without its opposite, because it wouldn’t be whole.
Vinegar is bitter, but also delicious when added—in the right proportion—to the right food—so is everything in life.